Home » Because They Are No More: A message from Archbishops Anne Germond and Fred Hiltz

Because They Are No More: A message from Archbishops Anne Germond and Fred Hiltz 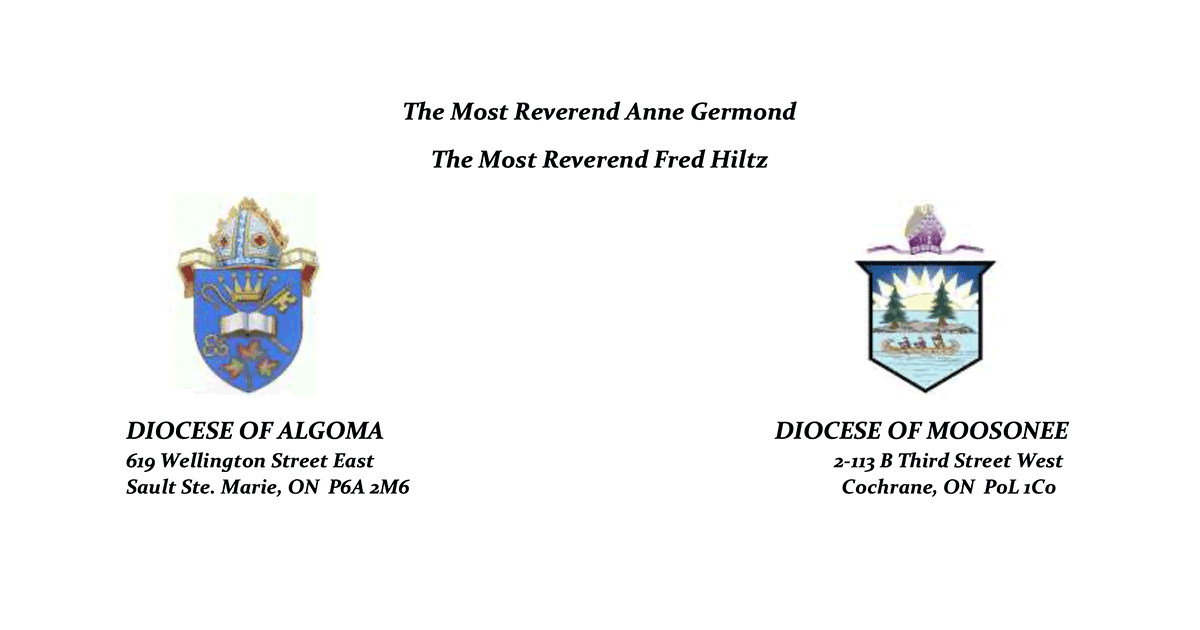 This letter in PDF format

The recent discovery of the remains of 215 children buried in unmarked graves on the grounds of the former St. Andrew’s Indian Residential School in Kamloops, British Columbia has gripped the hearts of many people throughout Canada and around the world. It has re-opened the terrible grief of so many Indigenous families whose children died in Residential Schools. It has ripped open wounds that had begun to heal for survivors of residential schools and their families, as well as those committed to walking in peace and reconciliation with ‘all our relations’. (Abp. Mark MacDonald)

The grief which we acknowledge is the kind of which the prophet Jeremiah writes. “Thus says the Lord: A voice is heard in Ramah, lamentation and bitter weeping. Rachel is weeping for her children; she refuses to be comforted for her children, because they are no more.” (31:15)

It is said that Rachel’s weeping resulted from an assault on her people by peoples who had come from afar to conquer them. In the era of colonial expansion by European empires bent on conquest, Indigenous Peoples across Turtle Island were assaulted- their lands stolen, their social structures considered primitive, their spirituality and ceremonies dismissed as pagan and their very identity denigrated. It was not long before a scheme was developed to, “absorb Indigenous People into the body politic.” It was called the policy of assimilation, enforced through The Indian Residential Schools established in 1879. According to conservative estimates from Canada’s Truth and Reconciliation Commission approximately 4000-6000 children died amid abuse and neglect in the residential school system. Between the 1800s and 1996 about 150,000 First Nations, Métis and Inuit children were separated from families and forced to attend boarding schools, where at least one in 50 children died. This information has been known for years.

The purpose of the schools was to “civilize and Christianize”. “In order to educate the children properly,” wrote Hector Langevin, Public Works Minister of Canada, 1883, “we must separate the children from their families. Some people say this is hard but if we want to civilize them we must do that.” So it was that, ‘they came for the children’—that is the Indian Agents. They tore children from the arms of their parents and grandparents and loaded them onto trucks and planes and carried them away.

They Came for the Children is the title of a book produced in 2012 by Canada’s Truth and Reconciliation Commission. It documents the horrible experiences of thousands of aboriginal children. Upon entry their clothes and trinkets from home were discarded, their bodies scrubbed raw and their beautiful braids cut off. Forbidden to speak their own language or to socialize with their own siblings, they were terrorized into silence. In many of the Schools the children were malnourished. Many were sent to the woods to cut and haul wood and to the fields to farm. It is said “they were worked too hard and taught too little.” Many of them were physically abused through beatings, strappings, and floggings. Many were punished through solitary confinement in dark closets. Many were sexually abused and made to feel ‘dirty.’

The discovery of the remains of the holy innocents buried in unmarked graves in Kamloops, BC has justly angered Indigenous Peoples all across the country. They are fed up with cover-up and lies. And they are not alone. Many non-indigenous people across the country are incensed by this atrocity against children. In placing teddy bears, toys, and shoes on the steps of government buildings and churches they are one with Indigenous People both in mourning and in demanding accountability for the assaults borne by these children and ‘all their relations’ through several generations.

“God, our Creator and Redeemer, we thank you for the gift of the children entrusted to our care. Give us joy in their enthusiasm for life, their delight in discovery and their fun at play. May we be patient and under-standing, ready to nurture and guide them in good ways. Through our love may they come to know your love and your will, that they be healthy and happy. We pray in the name of your dear Son whose heart for the children was beautiful, Jesus Christ our Lord. Amen.”

PrevPreviousJune 8 Covid update from Archbishop Anne
NextPrayer Service for National Indigenous Peoples DayNext
About us
The Diocese of Moosonee straddles both northern Ontario and Northwestern Quebec covering some 560,000 sq kms, second to the Diocese of the Arctic in geographic size. It is one of the great historic missionary areas of the Anglican Communion and of early Canada with records dating back to 1780.
Address